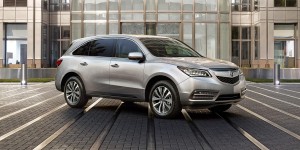 Acura has redesigned their MDX to provide drivers with an even better version of their luxury crossover. In an effort to appeal to an even wider audience, Acura has taken the time to redesign and amp up most of the vehicle. Here are a few of the changes to the MDX.

Acura has redesigned the engine for the new MDX, choosing to make the engine a little less powerful. The previous version of the MDX had 300 horsepower generated from a 3.7-liter V-6 engine. The new version has a 3.5-liter V-6 and is rated at 290 horsepower. The small drop in the size and performance of the engine will get drivers better gas mileage, even with four wheel drive. Although the size and power of the engine decreased a little, that doesn’t mean that the driving experience will be diminished.

The weight of the MDX has been considerably reduced. Compared to the previous model, the 2014 MDX is 275 pounds lighter. Acura was able to accomplish this weight loss by building the vehicle out of lighter, high-strength steel and by using a lighter-weight suspension system. These changes improve handling and will make the MDX even more fun to drive.

The new MDX has better seals around its doors and windows, and the windows are made of a thicker glass. Both of these improvements provide a much quieter ride for the driver and passengers of the vehicle.

Size of the Wheelbase

As implied above, the 2014 MDX is sleeker than its previous version. The wheelbase on the new model is a few inches longer and was narrowed by about an inch. Acura hopes that this will put an end to the comments about the MDX being bulky or difficult to park. Also, the longer wheelbase will contribute to a smooth ride.

In the old model of the MDX, passengers that rode in the third row seats could only enter and exit the vehicle on the right-hand side. Now, the new MDX allows third-row passengers to enter or exit on either side of the vehicle.

To test drive a new 2014 MDX in Indianapolis, you’re going to need to head to a dealership.  Strap on your driving gloves and view local inventory by clicking HERE.  Then check out our advice on taking a test drive to find out exactly what to look for when climbing behind the wheel of your next new vehicle for the first time.