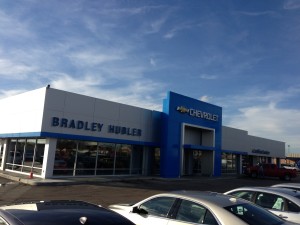 Staying in business is about adaptability.  This year, Bradley Hubler Chevrolet is celebrating 30 years in business in Franklin, Indiana.  But the story of the dealership goes far beyond that.  It started as a livery stable!

In 1907, Alexander’s Livery Stable housed and sold horses.  As modern modes of transportation became commercially available, it only made sense that the businesses who already specialized in transportation needs would continue to do so.  People began to trade in the their horses for cars, and Alexander’s provided the very first Chevrolet.  The Series C Classic Six got the brand off the ground, and Chevrolet became ingrained in the Franklin community.

The store moved out of downtown Franklin to its current location in the mid 1960s.  After several changes in ownership over the next few decades, Brad Hubler purchased it as his first independently owned store.  The Hubler family has owned dealerships in and around Indianapolis for nearly 60 years, and Brad grew up working in the family business.  This venture was the first step to creating what today is known as the Hubler Automotive Group.

Mr. Hubler’s success in Franklin was spurred by genuine enthusiasm for selling and serviingng quality vehicles.  His employees caught the fever, and the dealership and its people have become an integral part of the Franklin community.  Thirty years later, the store has undergone a remodel, bringing the façade up to date, and making the service department and showroom more comfortable for customers.  See pictures of the renovation process here.

Today, Mr. Hubler owns 10 stores spread out across Indiana, from Shelbyville and Rushville to Bedford.  The groups five Chevrolet stores have sold more Chevy vehicles than anyone else in the state, and have the most new Chevrolet vehicles in stock of any store or group.  Other brands in the Hubler group include Acura, Mazda, Nissan, and Ford, Buick, and GMC.  You can see their 2000 vehicle inventory on www.drivehubler.com.

Bradley Hubler Chevrolet is celebrating the remodel and the kick-off of its 30 year anniversary celebrations on June 1, from 10 to 4, with giveaways, a cook out, and music from local radio station KORN Country.  To pre-register for the prizes, join them on Facebook and enter to win a 42″ flatscreen TV http://a.pgtb.me/VTbFnQ.