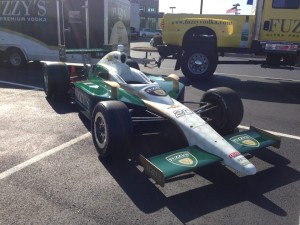 The world of racing is always changing, and those changes often make IndyCar racing more exciting. The 2012 racing seasons brought the new ICONIC plan (Innovative, Open-wheel, New, Industry-relevant, Cost-effective) to IndyCar that will continue to make changes to the cars over the years. For now, though, many of the changes have been focused on the engine and chassis, though you will likely see other changes in the future.

Dallara, who designed the previous chassis as well, designed the new IndyCar chassis. All IndyCars are now required to have a core rolling chassis, which is referred to as the IndyCar Safety Cell. From there, teams have the option of outfitting the chassis with different aero kits—yet the multiple aero kits are being put off another year due to economic reasons. However, both Lotus and Chevrolet intend to design aero kits.

The new ICONIC engines introduced in 2012 are 2.2 L V6 turbocharged engines, which produce somewhere in the neighborhood of 550-700 horsepower. These engines run on E85 fuel—quite a change from the 100% fuel grade ethanol used previously. Chevrolet, Honda, and Lotus are supplying engines.

These successful changes led to new injection rules for the 2013 engine. Both port and direct injection are now allowed in engines, which has allowed manufacturers to revise their fuel systems. With two injectors allowed per cylinder, there are more options to create power from the fuel systems. So far, Chevrolet and Honda have been able to implement direct injection into their engines, and production on Lotus engines has ceased for the time being.

The changes to the cars are all designed to make IndyCar racing more exciting year to year, but also focus on cost effectiveness as well. The changes being implemented by ICONIC means that with lower costs, many more potential racers will be able to join the field, making it much more diverse. With so many exciting and up-and-coming racers behind the wheels of these new engines, the Indy 500 is sure to be an exciting race this year!

What’s your favorite part of the race? Share your stories with us in the comments, and share your tips for having a great race day experience.